Who's Susan? Following our starlet from Djibouti to Leiden she keeps bringing certified legitness to you and your crew. The first 12" release, named 'you are the prototype', is a V.A. with tracks by Raär, Axefield and William Caycedo, spanning three different vibe's, all within Susan's comfort zone.

On the A side the killer lo-fi house vibes of 'Santori' meet hypnotic acid bumps in this late-nite party gem, keeping your ears ringing all the way back home. Axefield creates ample room on the B side for his deconstructed synth filled 'SNY' in which Japanese and Jamaican voice samples culminate in just under 9 minutes of bliss. William Caycedo's 'SNY' remix snaps you straight back to the dancefloor, with percussion as crisp as it gets and a baseline as low as it goes, this one has that instant deep gut reaction.

Susan wants you to party a lil' 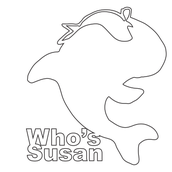